Irish soprano Majella Cullagh, is a bel canto specialist who trained at the Cork School of Music and at the National Opera Studio London. She’s an artist who performs extensively in oratorio and on the concert platform throughout the United Kingdom, Ireland, the Netherlands and the United States, and has recorded extensively, principally for the Naxos, Opera Rara and Chandos labels. Her career highlights include the role of Fiordiligi in Così fan tutte in Las Palmas; Adina in L’elisir d’amore at the Royal Danish Opera; the title role in Massenet’s Manon for Opera New Zealand; Micaela in Carmen and the Contessa in Le nozze di Figaro for Opera North; Donna Anna in Don Giovanni in Regensburg; Tatiana in Eugene Onegin at Grange Park Opera; as well as roles in The Death of Klinghoffer and Rossini’s La morte di Didone at the Royal Konzertgebouw in Amsterdam. Other recent engagements include: Donizetti’s Maria Stuarda in Antwerp, Stockholm, London and Dallas, Donizetti’s Poliuto at the Amsterdam Konzertgebouw, La Bohéme at the Royal Albert Hall, Il Barbiere di Siviglia in Toulon, Balfe’s Falstaff in Dublin, Donizetti’s Roberto Devereux in London, Verdi’s Alzira and Donizetti’s Diluvio universale in St. Gallen, Verdi’s Messa da Requiem in Amsterdam, Rossini’s Guillaume Tell at the Queen Elizabeth Hall in London, and Handel’s Messiah in Dublin, Rome, London, Cork etc. where she has worked with such distinguished conductors as: Jeffrey Tate, Sir Charles Mackerras, Giuliano Carella, Richard Bonynge and Robin Ticciati.
Despite her busy schedule, Majella was able to take the time to answer a few questions for this interview where she gives us a bit of insight into her career.
How and where did you start singing?

When I was three my mother sent me to singing and elocution lessons. I was an only child and she wanted me to get used to the idea of her leaving me somewhere and then coming to collect me. We were ALWAYS together and she was worried I might be terrified on my first day at school so she decided to “break me in” with a little one hour session. She had no idea that I had a singing voice.
Where and when did you professional debut take place?
I had my first leading role in Craig y Nos, Wales singing in Donizetti’s one act opera Il Campanello in 1993. A little bijou theatre in the Neath Valley built by Adelina Patti. 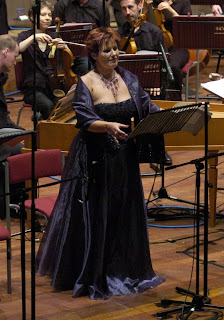 Who would you say were or are the major influences on your career?
Well first of all my parents. They both had lovely singing voices and we all sang at parties and social occasions. Also my first singing teacher Maeve Coughlan at the Cork School of Music. She was an extraordinary woman with an immense passion for the voice, for melody and for poetry. I was lucky enough to continue my lessons with Gerald Martin Moore first in London, now in New York. He is a master technician and outstanding coach and knows my voice better than anyone. Elaine Padmore in her time at Opera Ireland, Christine Chibnall at Opera North really believed in me and furthered my career. And Patric Schmid at Opera Rara became a mentor and a friend. I owe my recording career to him and he ignited my desire to sing the bel canto repertoire.
How you describe yourself “vocally” speaking?
I am a (medium size) lyric soprano voice with a coloratura facility.
What would be the first thing you´d recommend to someone who has never heard you sing before?
I’d probably recommend that they listen to a recording of Mercadante’s Zaira or the live Adelaide di Borgogna (Rossini) recording from the Edinburgh Festival.
Do you know how many roles you´ve learned and sung throughout your career?
I have no idea…..a lot!
How do you feel about recording – has it been relevant to your career?
One of the sad things about most theatrical performances is that once they are done they are gone and live only in the memory. I love the fact that we can hold on to those moments by recording them. I feel incredibly fortunate that, thanks to Patric Schmid, I have recordings that I can share with family, friends, fans and prospective employers. There is a certain credibility attached to a having a discography. It’s almost a validation of being a singer of repute.
Do you prefer live or studio?

There are pros and cons to studio and live recording. In a studio you have the chance to re-record sections that need improvement but there is nothing like the atmosphere of a live performance.
What is that one performance or moment on stage you just can´t let go of?
I’ve learned to let go of everything, good and bad. I don’t beat myself up about nights when I feel I’ve not done myself justice and I don’t continually congratulate myself on moments of triumph. All that matters to a performer is the here and now.
Where do you see your career heading in the future?
I very much hope that it continues in the vein of making music with wonderful people in happy circumstances. I want to operate on as high a musical and creative a level as possible. I’m looking forward to discovering new houses, cities and interacting with ever more magical musicians.
Finally, what do you think is something that the average person would never even realize is a reality for an opera singer?
The amount of constant studying….new music…new music…..new music. And trying to carry musical scores that weigh a ton while you are attempting to board a plane.
Publicado por Una voce poco fa en 10:21