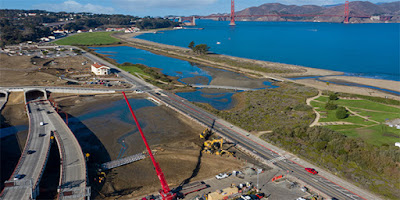 New Marshland and Trail Open to Presidio Visitors on December 18, Reaching a Milestone in the National Park's Watershed Restoration

San Francisco, CA (December 11, 2020) – Next week, the Presidio Trust unveils to visitors seven acres of restored tidal marshland and a new pedestrian trail near San Francisco Bay, marking a significant milestone in the 20-year revitalization of one of San Francisco’s original watersheds.

The site is known as Quartermaster Reach, named for the U.S. Army’s Quartermaster Corps, which operated in the area when the Presidio was a military post. The project transforms a formerly paved construction site under the “Presidio Parkway” approach to the Golden Gate Bridge into a beautiful new wetland ecosystem. Creeks now flow above ground along the Presidio’s largest watershed known as Tennessee Hollow to San Francisco Bay through Crissy Marsh, improving the biodiversity of the Presidio. The site will allow visitors to enjoy an intimate experience of nature just minutes from downtown.

Work at Quartermaster Reach brought an 850-foot length of stream once buried in a pipe back above ground through excavation. Box culverts were then installed beneath Mason Street at Crissy Marsh to allow the fresh water of the stream to flow into the saltwater marsh and San Francisco Bay, creating unique brackish habitat that is vital to a variety of plant and animal species.

Specially fabricated fiberglass panels installed within the culverts, and concrete and shell “reef balls” placed in the marsh channels, are part of a unique experiment to promote the resurgence of the native Olympic oyster. The team is currently planting 23,000 plants - including more than 40 different species of saltmarsh and dune plants grown in the Presidio Nursery - to create habitat attractive for the Presidio’s many migrating shorebirds and water animals like fish and crabs.

“Our planet is in the midst of an extinction crisis due to the destruction of habitat. Projects like this give us hope that we can turn the tide. We’ve turned back time more than a century to restore the natural systems of the Presidio’s shoreline. We hope the lessons we learn here will be helpful to others who are also committed to restoring Bay ecology,” says Jean Fraser, CEO of the Presidio Trust.

With the addition of a pedestrian bridge and trail connector, visitors can hike from Crissy Field’s East Beach, under the Presidio Parkway, and along the Tennessee Hollow Trail all the way to the southern end of the Presidio.

“The pandemic has shown us how critical access to nature is, with the myriad of health benefits it provides for human beings - especially in an urban environment,” says Laura Joss, Superintendent of Golden Gate National Recreation Area. “With the adjacent Presidio Tunnel Tops project opening in October of 2021, these new park sites will continue our work in providing a national park experience for all.”

Quartermaster Reach is a huge milestone in the 20-year effort of the Presidio Trust, the Golden Gate National Parks Conservancy, and the National Park Service to restore the park’s largest watershed. Work has been completed in sections at sites including El Polin Spring, MacArthur Meadow, and Thompson Reach. Other sections will be restored in coming years.

“We are so grateful to the people who have supported the restoration of this watershed, from individual donors to Parks Conservancy members and volunteers,” says Christine Lehnertz, President & CEO of the Golden Gate National Parks Conservancy. “This is an incredible gift to this region, and builds on the work that began in 2001 with the restoration of Crissy Field and Crissy Marsh.”

The Presidio of San Francisco is the traditional territory of the Yelamu, a local tribe of Ramaytush Ohlone peoples of the San Francisco Peninsula. Yelamu familes lived in the village of Petlenuc.

The Tennessee Hollow Watershed’s creek system is comprised of three tributaries that converge at MacArthur Meadow. The stream, dubbed Petlenuc Creek, then continues north in a single channel through a variety of habitats, ultimately emptying into Crissy Marsh and San Francisco Bay. For centuries, people used this creek system as a water source, beginning with the native Ohlone and later Spanish settlers. Over time, the militaries of Spain, Mexico, and the United States substantially altered where and how the creeks flow, creating dams and wells, and ultimately forced the water underground into pipes to create dry land for building.

Restoration of the Tennessee Hollow Watershed began in the late 1990s at the headwaters near the Presidio’s Inspiration Point. Major revitalization projects have included the restoration of Crissy Marsh (2001), Thompson Reach (2005/2006), El Polín Spring (2010/2011), YMCA Reach (2013/2014), Quartermaster Riparian (2014/2015), and MacArthur Meadow (2015/2017). After Quartermaster Reach (2020), the final sections to be restored are the Eastern Tributary (under Morton Field) and Central Tributary (between El Polin and MacArthur Meadow).

Quartermaster Reach restoration is made possible through the support of the Environmental Protection Agency through the San Francisco Bay Water Quality Improvement Fund, the San Francisco International Airport wetlands mitigation agreement, the National Park Service, the Evelyn and Walter Haas, Jr. Fund, and the David L. Davies Fund of the Weeden Foundation. Generous members of the public have made substantial donations in other areas of the watershed through the Golden Gate National Parks Conservancy.

About the Partnership for the Presidio

The Partnership for the Presidio works to sustain the Presidio’s natural beauty, preserve its history, maintain its funding, and create inspiring national park experiences for visitors. Two federal agencies manage the Presidio jointly: the Presidio Trust and the National Park Service, with support from their non-profit partner, the Golden Gate National Parks Conservancy. Together, the partnership has transformed one of America’s most storied military posts into the centerpiece of one of the most visited places in the national park system.