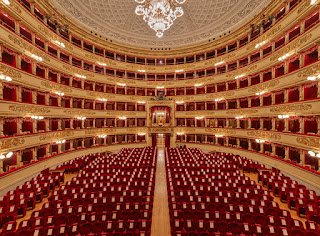 Salome conducted by Zubin Mehta, a Weill diptych conducted by Music Director Riccardo Chailly with Irina Brook directing, Rossini's Stabat Mater conducted by Myung-Whun Chung, and a concert conducted by Nicola Luisotti, are among the highlights of the La Scala calendar, alongside the ballet's tributes to Nureyev and to contemporary choreographers. The La Scala program until March includes fifteen appointments from 20th February to 27th March including opera, ballet, concerts and masterclasses. In addition to the consolidated collaboration with Rai Cultura, there will also be streaming on the Theatre's channels.

There are two new opera productions: the previously announced Salome, conducted by Zubin Mehta and directed by Damiano Michieletto on February 20th, will be joined on March 18th by a diptych of Kurt Weill’s Die sieben Todsünden and Mahagonny-Songspiel, conducted by Music Director Riccardo Chailly, directed by Irina Brook and featuring Kate Lindsay. Throughout his musical life Maestro Chailly has explored the 20th century repertoire in depth, but he has never conducted Kurt Weill, an indispensable author in the history of the 20th century who has been rarely performed at La Scala.

On Thursday, February 25th at 9.15 p.m., Rai Cultura will broadcast the evening Great Moments of Dance, recorded in December 2020, as a TV premiere on its channel Rai 5. This will be followed by two further evenings in streaming: a Tribute to Nureyev with some of his most spectacular choreographic creations entrusted to the La Scala dancers on February 28th, preceded by two masterclasses held by the Ballet Director Manuel Legris - who was chosen by Nureyev as étoile at the Paris Opera - on Thursday 25th and Friday 26th at 7 p.m.; and an evening dedicated to contemporary choreographers on Saturday 27th March, also preceded by two masterclasses on Thursday 25th and Friday 26th.

On  March 5th Myung-Whun Chung conducts the Orchestra of Teatro alla Scala in Joseph Haydn's Trauersymphonie and Gioachino Rossini’s Stabat Mater with Eleonora Buratto, Veronica Simeoni, René Barbera and Andrea Mastroni: this concert marks the return to full activity of the Teatro alla Scala Chorus conducted by Bruno Casoni. Nicola Luisotti is on the podium on Wednesday March 24th for a concert dedicated to the Italian repertoire with soprano Maria Agresta and tenor Francesco Meli.

The Recitals begin with the comeback to La Scala of tenor Vittorio Grigolo on Monday February 22th with pianist Vincent Scalera with a programme of opera arias and chamber songs from Donizetti and Verdi to Gounod, Massenet and Tosti. On Sunday March 7th baritone Ludovic Tézier and Helmut Deutsch will perform Lieder and mélodies ranging from Schubert, Schumann and Liszt to Mozart, Ibert, Fauré and Berlioz. On Sunday March 14th, a few days before she takes on the role of Anna I and Bessie in the diptych directed by Riccardo Chailly, Kate Lindsay offers an evening of songs by Kurt Weill accompanied by pianist Baptiste Trotignon. Finally, Aleksandra Kurzak will record with pianist Marek Ruszczynski and violist Tomasz Wabnic a recital with music by Chopin, Schumann, Brahms and Tchaikovsky, which will be broadcast on April 4th.

On Saturday February 27th, La Scala hosts the winner of the 2019 Busoni Competition, Emanuil Ivanov, in an extraordinary concert, underscoring the joint commitment of the Theatre and the Competition to give online visibility to young talents, particularly penalised by the restrictions caused by the pandemic; the program features Busoni, Ravel and Skrjabin.