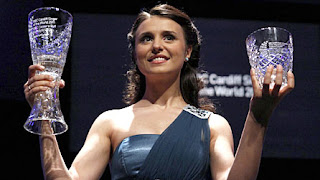 Picture Courtesy of the BBC


Valentina Naforniţă from Moldova – Winner, BBC Cardiff Singer of the World and Dame Joan Sutherland Audience Prize and Song Prize finalist.
Soprano Valentina Naforniţă was born in 1987 in Glodeni, Republic of Moldova. She graduated from the Stefan Neaga Music College in Kishinev in 2006 and continued her training in Romania, at the voice department of the National University of Music in Bucharest, where she studied with sopranos Maria Slatinaru-Nistor and Eleonora Enăchescu. The latter is teaching her on the MA programme at present. In addition, she has taken master classes with soprano Mariana Nicolesco and conductor Christian Badea. Valentina has participated in numerous competitions. Recent prizes include the Orange Prize for Young Musicians, Romania in 2009 and the second prize in the Hariclea Darclée Voice Competition in 2010. She has appeared in concerts and recitals on the great music stages in Romania, including the Romanian Athenaeum in Bucharest, and has also collaborated with the George Enescu Philharmonic Orchestra. Roles performed at the Opera Studio of the university include Norina Don Pasquale, Adina L'elisir d'amore, Mimì La bohème and Lauretta Gianni Schicchi. In 2008 she performed in the chorus of the Romanian National Opera and later this year she will sing Norina Don Pasquale with them at the Bucharest National Opera House. Valentina enjoys reading, travelling, ballet dancing and swimming.
BBC Cardiff Singer of the World Final repertoire
•Regnava nel silenzio (Lucia di Lammermoor) - Donizetti
•Song to the Moon (Rusalka) - Dvořák
•Je veux vivre (Roméo et Juliette) - Gounod
Publicado por Una voce poco fa en 10:25