Between Laughter and Emotion, between Dream and Theater: Le Nozze di Figaro in Munich 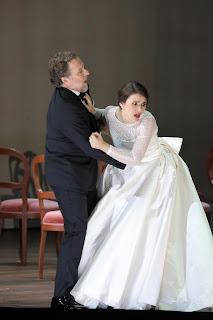 Some pieces, written two centuries ago or more, have reached us through the passing time - and their contemporary dimension and their political contexts have shrunk little by little. Today, we merely contemplate women and men, their emotions and relationships. In the new production of Munich Staatsoper, stage director Christof Loy underlines the work’s timeless aspects with a sober, dreamlike set and he concentrates on the characters’ inner lives. The result is all the more convincing as conductor Constantinos Carydis works with the same lack of  ornamentation. A certain asperity counterpoints the utter grace of Mozart’s music, while underscoring the depth of the characters’ emotions. At the very beginning, we watch with anguish as he chases Susanna and Figaro through their first duets whereas the recitatives develop with a deliberateness that is just as exaggerated. Fortunately things soon become more balanced: from Cherubino’s first aria on, there is utter joy on stage and in the stalls, and we rediscover one of our most beloved operas, heard and seen time and again, as if it were for the first time. A wonderful cast that, guided by a stage director devoted to the work and not his own ego, know  what they’re about with each stage movement  - this is joy in itself. Alex Esposito with his warm baritone is a credible, human and nuanced Figaro. He arrives on stage tumbling out of a puppet theater, where Susanna and himself play out the first scene of the opera, the way we stumble out of a morning dream that foretells the day to come; he finds himself facing the public and covers his eyes, terrified. He wears a grey street suit, timeless like all the costumes that subtly illustrate the characters’s personalities. Klaus Bruns is responsible for this other element of a coherent production. Cherubino arrives at first in a page’s costume that is exaggeratedly baroque, later he wears a mustard-colored uniform with vaguely Nazi boots. Solenn’ Lavanant-Linke interprets him with devilish androgynous charm and the voice of an angel. This androgynous  charm is accentuated by the sunglasses that Susanna puts on him at the end of the disguisement scene. „Venite inocchiatevi“ is sung sweetly and mischievously by Olga Kulchynska with her light and sweet voice. Her Susanna is something of a rebel opposite Marcellina, a bit lost opposite the Count and full of love opposite Figaro. Majestic of voice and deportment, deep and deeply in love with her husband, such is the Countess of Almaviva, interpreted by Federica Lombardi. Gifted with a warm, ample and generous voice, she surprises by the maturity of her interpretation - Internet tells us that she is not even thirty years old. Markus Eiche replaces Christian Gerhaher tonight and we’re nothing the worse for the exchange. With his powerful deep voice, he underscores all the aspects of his character, between desire and surprise, rage and stupefaction. All of the voices are wonderful tonight and the conductor does them ample justice. The orchestra is mostly of exemplary delicacy, punctuated by lovely solos. Interventions by the three keyboards used by Carydis lend an air of intimacy at chosen moments. Chad Kelly at the Hammerklavier and Andreas Skouras at the harpsichord and organ deserve extra praise for their contribution to the evening’s joys. Johannes Leiacker’s sets are sober and deceptively simple: a theater scene, oblique in the background, with curtains and a baroque landscape decoration, and in the foreground a few chairs, some props, suitcase, shoes… - a set of doors, dream symbol par excellence. These doors will grow from one act to the next, until in Act IV, an enormous door is the only stage element, along with an armchair. The production is a pleasure to the eye, full of fun and fougue, but it’s in Act IV that everything falls into place. From the start, we have been facing ruptures, rips in the fabric of our habits. Now, we see our habits deeply upset: after Barbarina’s aria - adorable and cristalline, Anna El-Khashem - Marcellina does not sing „Il capro e la capretta“, but „Abendempfindung an Laura“ KV 523. Anne-Sofie von Otter interprets Marcellina with just the right measure of ridicule, dignity and emotion. When she adresses her son with this wonderful lied and her golden voice, evoking her mortality, we are face to face with humanity’s deepest feelings, without artifice or make-up. Just as honest, in another register, is Basilio’s aria, that celebrates stupidity. Young tenor Manuel Günther sings it with gusto and agility. Figaro, who has come to doubt Susanna’s fidelity increasingly, breaks down after his air „Aprite un po’ quegli occhi“, convinced she’s finally given in to the Count. And now we see something that we have always dreamt of: Susanna speaks directly to Figaro and covers his forehead with roses. Olga Kulchynska sings „Deh vieni, non tardar“ with sweet and painful intensity, touching all the hearts in the house. When Figaro and Susanna finally recognize each other, their reconciliation has that same intensity that goes way beyond artistic performance,  and this bitter-sweet intensity will last until the final, when out of the giant door they come one after the other: Cherubino, Barbarina, Marcellina and Susanna dressed as the Countess, when the Count refuses the forgiveness that he will be granted himself so lovingly, and when finally the crazy day ends in an invitation to party. A Mozartean evening, all in all, as we would like to see them more often, between laughter and emotion, an opera evening as it should be, when everything comes together, and that we leave, moved and enriched: bravi e grazie tutti!